Holy Family Community Center presented an online viewing of the “Borderlands” episode of Art21: Art in the 21st Century. A discussion of the episode followed featuring Karin Campbell, the Phil Willson Curator of Contemporary Art at Joslyn Art Museum, Rachel Adams, the Chief Curator and Director of Programs at the Bemis Center for Contemporary Arts, and Misael Soto, a recent Bemis Artist in Residence, Born in Puerto Rico and based in Miami. The conversation was moderated by Lori Tatreau, Director of Programs at the newly forming Holy Family Community Center, a work of the Society of St Vincent de Paul.
Set in the region between the United States and Mexico—long a site of political conflict, social struggle, and intense creative ferment—these artists respond to one of the most divisive moments in the history of this area. “Borderlands” features artists Tanya Aguiñiga, Rafael Lozano-Hemmer, Richard Misrach, and Postcommodity.
Join us as we look at some of the ways contemporary artists are creating work about the world around them.

Borderlands
A vast geography encompassing open deserts and densely populated metropolises, the borderland between the United States and Mexico has long been a site of not only political conflict and social struggle but also intense creative ferment. Taking a new curatorial and filmmaking approach, Art21 connects and juxtaposes a group of acclaimed artists as they work along the U.S.-Mexico border, interweaving their stories to chronicle the creative responses to one of the most divisive moments in the history of this area. From an epic interactive searchlight installation along the El Paso–Juárez divide to a deeply personal performance at the Tijuana border wall, these artists consider the border as an open wound, a theatrical stage, a political podium, a studio, and a contradictory landscape that features both ugliness and beauty. This episode explores how contemporary art can reveal the new and unexpected, asking viewers to question their preconceived notions of a place seemingly made familiar by mass media. Ultimately, the artists featured in this hour challenge themselves and audiences to embrace a more empathetic view of one of the most contested areas in North America. 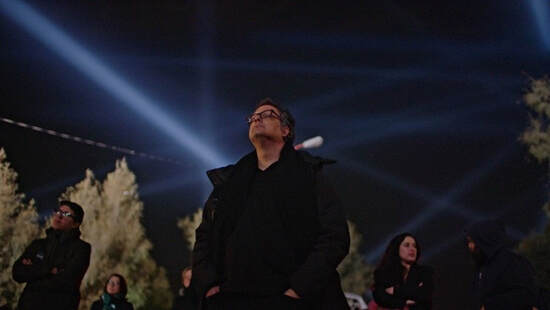 Rafael Lozano-Hemmer
Born 1967, Mexico City, Mexico
An artist working at the intersection of architecture and performance art, Rafael
Lozano-Hemmer creates participatory artworks that utilize technology like robotics, heart-rate sensors, and computerized surveillance tools in order to facilitate human connection. Technologically sophisticated yet deceptively simple in their execution, Lozano-Hemmer’s spectacular, immersive works are often installed in public places as a means of transforming these sites into forums for civic engagement. From an education in chemistry, Lozano-Hemmer’s early career in a molecular-recognition lab influenced his conceptual and practical approach to creating art. As early as the 1990s, Lozano-Hemmer worked with custom software and surveillance technologies to create interactive artwork. His work often invites viewers to provide a biometric “snapshot” of themselves—whether their fingerprint, heartbeat, or portrait—that the artist then transforms into a dynamic, collective landscape and representation of both anonymity and community. For his interventions in public spaces, Lozano-Hemmer transforms facades, plazas, parks, and skylines by adding audiovisual elements that viewers can control. The artist refers to this as “relational architecture,” a practice that re-contextualizes viewers’ understandings of public spaces and received narratives about them. I love it, when one has a pre-established notion of what one is going to see and it’s wrong. —Rafael Lozano-Hemmer 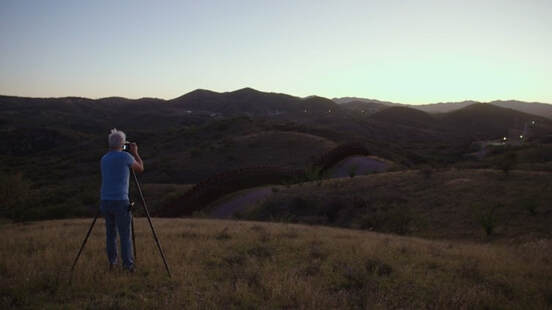 Richard Misrach
Born 1949, Los Angeles, California
A leading photographer of his generation, Richard Misrach explores the collision of nature and culture through his large-format color photographs. Fascinated by the political and environmental transformation of the deserts of the American southwest, Misrach creates hauntingly beautiful photographs of arid landscapes that contrast the natural and man-made tragedies found there: floods, fires, nuclear-test sites, the U.S.-Mexico border wall, and the traces of migrants who make the perilous journey north. Misrach began his career in Berkeley,  California, in the early 1970s, photographing the anti-war protests happening throughout the city. Misrach realized that his early work failed to meet his social-activist ambitions and instead turned his camera to the deserts of southern California, Nevada, and Arizona. His ongoing series, Desert Cantos, consists of groups of photographs that depict the ecological effects of human intervention in the desert landscape. A more recent chapter, Border Cantos, captures the pathos of the 2000-mile border between the U.S. and Mexico, including the border wall and the artifacts of migration—clothing, water barrels, ladders—left behind. One of the things I’ve learned from this series is that until you go see this place for yourself, you have no idea what’s really going on there. —Richard Misrach
​ 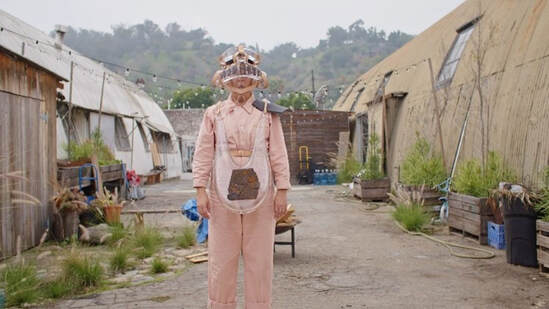 Tanya Aguiñiga
Born 1978, San Diego, California
An artist, designer, and craftsperson, Tanya Aguiñiga works with traditional craft materials like natural fibers and collaborates with other artists and activists to create sculptures, installations, performances, and community-based art projects. Drawing on her upbringing as a binational citizen, who daily crossed the border from Tijuana to San Diego for school, Aguiñiga’s work speaks of the artist’s experience of her divided identity and aspires to tell the larger and often invisible stories of the transnational community. Aguiñiga began her career by creating collaborative installations with the Border Art Workshop/Taller de Arte Fronterizo, an artist collective that addressed political and human rights issues at the U.S.-Mexico border. The artist co-built and for six years ran a community center in Tijuana, aimed at bringing attention through arts initiatives to injustices that the local community faced. Aguiñiga has maintained this spirit of activism and community collaboration throughout her career, going on to create many performances and installations that involve the participation of other artists, activists, and community members. In her installations, furniture, and wearable designs, Aguiñiga often works with cotton, wool, and other textiles, drawing upon Mesoamerican weaving and traditional forms. A lot of my work is about visibility and more representation: allowing more people to see themselves or their struggles mirrored by the work. —Tanya Aguiniga 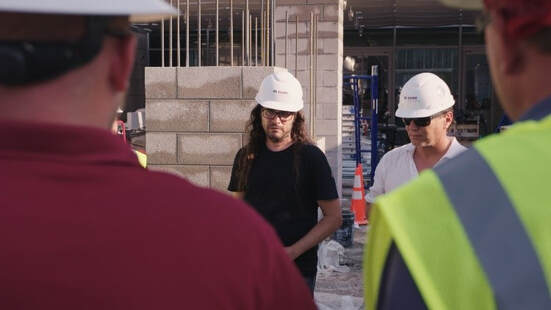 Postcommodity
Cristóbal Martínez, New Mexico and Kade L. Twist, California
Postcommodity is an interdisciplinary arts collective composed of Cristóbal Martínez and Kade L. Twist. Postcommodity creates site-specific installations, interventions, videos, and sound works, utilizing the members’ shared Indigenous lens to reveal the incongruent histories embedded in our modern-day institutions, systems, and beliefs. The group often works closely with local communities to create poetic installations that reimagine sites of conflict as places of curiosity that foreground Indigenous culture. Postcommodity was founded in 2007 by Twist, Steve Yazzie, and Nathan Young and acknowledges the important contributions of its previous collaborators, including Yazzie (2007–
2010), Young (2007–2015), and Raven Chacon (2009–2018). The collective focuses on centering Indigenous perspectives and working in response to the land where their projects take place. When I look at the Borderlands, I see a clear demarcation of colonization. We’ve got to start including indigenous worldview in relation to the border. —Kade L. Twist

Karin Campbell is the Phil Willson Curator of Contemporary Art at Joslyn Art Museum. Since joining the museum in 2012, Campbell has curated several major exhibitions, including 30 Americans, Word/Play: Prints, Photographs, and Paintings by Ed Ruscha, and Sheila Hicks: Material Voices. She oversees Joslyn’s collection of postwar and contemporary art and is the principal curator for the Karen and Doug Riley Contemporary Artists Project Gallery, the first space in the museum’s history dedicated specifically to living artists.

Campbell completed her BA in art history and political science at the College of the Holy Cross, Worcester, MA in 2006 and her MA in curatorial studies at the Center for Curatorial Studies, Bard College, Annandale-on-Hudson, NY in 2011. From 2006 to 2009, she served as curatorial assistant in the contemporary art department at Carnegie Museum of Art, Pittsburgh, where she helped organize Life on Mars, the 55th Carnegie International. Before moving to Omaha, Campbell curated the 2011-2012 installment of Espai 13, an annual exhibition series at the Fundació Joan Miró, Barcelona.

Rachel Adams is the Chief Curator and Director of Programs at the Bemis Center for Contemporary Arts. Past curatorial appointments include Senior Curator at UB Art Galleries, Curator-in-Residence at Disjecta Contemporary Art Center and Associate Curator at Arthouse at the Jones Center (now The Contemporary Austin). Adams holds an MA in Exhibition and Museum Studies from SFAI and a BFA from SAIC. Exhibitions include Claudia Wieser: Generations, Alison O’Daniel: Heavy Air, Jillian Mayer: TIMESHARE, The Language of Objects, Wanderlust: Actions, Traces, Journeys 1967-2017, and Introducing Tony Conrad: A Retrospective (co-curated). Forthcoming projects include exhibitions with Paul Mpagi Sepuya, Joey Fauerso, Maya Dunietz and All Together, Amongst Many: Reflections on Empathy, which offers reflection and insight as the nation embarks on the next presidential term in the United States.

She has worked with artists including Amie Siegel, Ragnar Kjartansson, Lydia Okumura, Lui Shtini, Kambui Olujimi, Brendan Fernandes, Seher Shah, John Grade, Claire Ashley and Alyssa Pheobus Mumtaz. Her writing has been included in exhibition catalogues Introducing Tony Conrad: A Retrospective, Out of Easy Reach, Prospect.3 New Orleans, and Texas Prize 2012 as well as Afterimage, artforum.com, Art Papers, Art Practical, Modern Painters, and Texas Architect. She is an alumnus of the 2016 ICI Curatorial Intensive in New Orleans and the 2016 Artis Curatorial Research Trip to Israel. She has lectured at MOCAD, The Rose Art Museum, Hallwalls Center for Contemporary Art, PNCA, University of Nebraska Omaha,Texas State University, the University of Texas at Austin, and the School of the Art Institute of Chicago.

Misael Soto’s practice interrogates and subverts contextually associated everyday objects and systemic roles, disrupting and manipulating space, systems, and frameworks. The time-based and ephemeral work involves interventions made upon existing objects, performative activations, institutional mediations, and is, more often than not, a combination of these elements. Born in Puerto Rico (1986) and based in Miami, Misael received their MFA from the School of the Art Institute of Chicago (2018) and graduated Magna Cum Laude with a Bachelor's Degree in Art History from Florida Atlantic University (2008). Misael was the first ever Art in Public Life Resident with the City of Miami Beach's Department of Environment and Sustainability and Oolite Arts, where they founded the Department of Reflection. Beyond their public artworks which they have shown extensively for many years, Misael has exhibited at MCA Chicago, Open Engagement 2015, the Museum of Contemporary Art in North Miami, Material Art Fair in Mexico City, David Castillo Gallery in Miami, Museum of Art Fort Lauderdale, and Young at Art Museum in Davie, Florida, amongst others. Misael has participated in the ACRE Residency Program in Steuben, WI and HomeBase Project's HB Build Artist-in-Residence program in Berlin, and will participate in Bemis Center for Contemporary Arts' Fall 2020 Residency Program in Omaha, NE and Santa Fe Art Institute's 2021 residency.

Lori Tatreau is the Director of Programs at Holy Family Community Center, helping transform a recently closed church building into a community center with a focus on food and the arts. She is working with The Moth, Great Plains Theater Festival, Anastasis Theater Company, as well as Art21 and many others to bring professional arts experiences to those who do not normally have access. The community center will extend its current food and clothing outreach to the homeless by adding arts programs, mentoring, classes and other support to grow community in the near north downtown area of Omaha. Lori has an MFA in Painting from Hunter College and an MPA in Nonprofit Management from UNO. She has been exhibiting and selling work for decades as well as working in the local sustainable food movement in many capacities, including organizing the Stored Potential Harvest Dinner for 500 at the silos in October 2010. ​